Mphamvu, a two year old orphan elephant, is finally settling in at the release facility in Kafue National Park, Zambia. After a difficult first few weeks where he was often seen alone 15km from the release facility, the male calf has now bonded warmly with his surrogate herd.

He joined 14 other calves in September at Game Rangers International’s Elephant Orphanage Project – Zambia’s only elephant orphanage. They are cared for around the clock at Lilayi Elephant Nursery in Lusaka and the Kafue Release Facility, which together provide a refuge for calves mostly abandoned as a result of poaching and human-elephant conflict.

Experts observe the behaviour of the elephant calves to monitor their welfare on each step back to the wild. The project’s oldest orphan, Chodoba, has been spotted having a number of positive social interactions with wild herds, which shows credible signs that he will return to the wild too.

Since it began supporting the project in 2010, Colchester Zoo’s Action for the Wild charity has donated £25,000 to Game Rangers International towards rescuing, rehabilitating and releasing orphaned elephants back into the wild.

Essential facilities at Kafue, such as the ‘Outer Boma’ which lets the elephants interact freely and safe from predators throughout the night, are key to preparing them for a second chance at life in the wild. 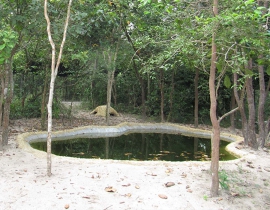