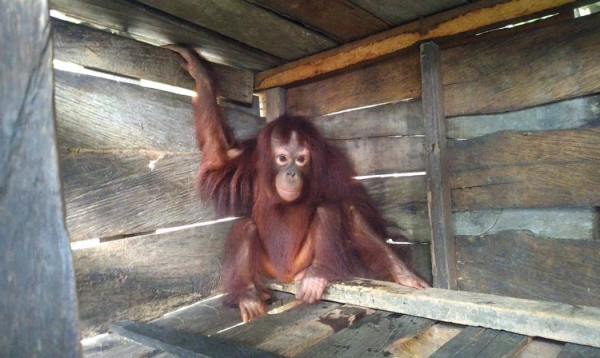 In October, Action for the Wild sent a £7,000 donation to the Orangutan Foundation, bringing our total contribution to over £47,000 for this charity.

Our funds help to cover the veterinarian’s salary and assist with orangutan translocation costs. There have been 7 orangutans rescued and translocated since mid July. In August, in the same week that the team rescued a pair of wild orangutans from an isolated oil palm plantation, they received news of another orangutan being kept as a pet. The owner had contacted government officials as they could no longer care for the ape, and therefore Orangutan Foundation staff  were called upon to assist. On examining the orangutan, she appeared in good health so was taken to Camp Buluh in the Lamandau Wildlife Reserve. It’s here that she’ll join another orphaned orangutan, in the soft-release programme, with the hope of one day being released into the wild.

In October, reports from government officials suggested that an orangutan had been found by a group of villagers who had discovered the great ape when it ventured into an area of community plantations- quite possibly searching for food as a result of the remnant fires that have blotted the region in recent weeks. On arrival, the team were able to observe that the orangutan was a female who had already been independently captured by the local people and put inside a transport crate. Shortly after the rescue the team received a worrying piece of news. It transpired that during the capture of the female, she had also been separated from a young infant that local residents wished to keep as a pet. Fortunately however, the 2 month old baby was rescued and reunited with its mother and subsequently released a few days later into Lamandau Wildlife Reserve.

The fires disturbing the region are often the result of traditional farming methods. Towards the end of a dry season, farmers in this part of the world will routinely use aslash and burn agricultural technique to clear their land and provide better conditions for crop regeneration. Local communities may also use this method in order to create clearings so that they can hunt for deer or wild boar. In particularly dry years, these fires can burn out of control for prolonged periods of time; causing to orangutans to search for food and come into conflict with people.

Never a dull moment at the Cambodian Bear Sanctuary

There is never a dull moment at the Free...