Support for Save the Rhinos International dog unit!

Since 2006, Colchester Zoo’s Action for the Wild has donated over £78,500 to support Save the Rhinos International and specifically to boost the capacity and morale of rangers in Hluhluwe-iMfolozi Park, South Africa.

Covering 960 square kilometres, Hluhluwe-iMfolozi Park is based in the KwaZulu-Natal (KZN) Province of South Africa and is renowned worldwide for being the historical home of the Southern white rhino. The Park has also played an important role in growing the country’s black rhino population.

Unfortunately, these populations have not escaped the rhino poaching crisis that has spread across Africa. In February 2017, the Department for Environmental Affairs released poaching statistics for 2016, confirming that a total of 1,054 rhinos were killed for their horn across South Africa alone. Although poaching is down in Kruger National Park, it is significantly up in other provinces, particularly KwaZulu-Natal. Rhino poaching has escalated 10-fold in Hluhluwe-iMfolozi Park since the beginning of the poaching crisis in 2007. The pressure on the Park is now dramatically increasing as criminal syndicates are beginning to move to areas such as Hluhluwe-iMfolozi Park. Aerial surveillance and helicopter work are now an integral part of anti-poaching activities undertaken, alongside a huge increase in the number of extended camping patrol deployments away from traditional field ranger camps. The surge in poaching has forced ranger staff to work longer hours and keep especially vigilant during the night.

The Park’s budgets have been severely stretched by the cost of protecting rhinos, which impacts the availability of funding for equipment to support areas like the new dog unit and maintaining the picket camps and basic equipment, which are necessary for ranger safety, capacity and morale. As a result, Action for the Wild’s fund have contributed to purchasing equipment to ensure the maintenance and running of the camps, including handyman tools (such as wrenches, spanners, drills, etc.) and providing assorted field equipment (including assorted camping, cleaning and repair kits, battle jackets and military backpacks). In addition, we have assisted with the purchasing of 325 ration packs and 4 LED torches for camping for field rangers, ensuring that field rangers are looked after when they spend extended periods of time out in the field with the rhino that they are protecting. This purchased equipment increases staff capacity and lifts rangers’ morale, allowing them to deploy for longer periods in greater comfort.

A large amount of our funding was put into ensuring that the dog handler facility based in the Park was refitted and available for the staff and new dogs to be accommodated. Our funds helped to purchase the building materials, the necessary equipment for the dogs, and feed and veterinarian treatment for the canine units. Phoenix, one of the tracker dogs, has already assisted in tracking down poachers in the Reserve. Gunner is a cold-scent tracker dog, and is often used as a follow up after incursions.

Action for the Wild’s funds have thus been used to enhance Hluhluwe-iMfolozi Park’s anti-poaching operations to protect its incredibly important black and white rhino populations and significantly help law enforcement staff combat further rhino poaching losses, and therefore contribute to preserving the indigenous biodiversity of KZN for the benefit of present and future generations. 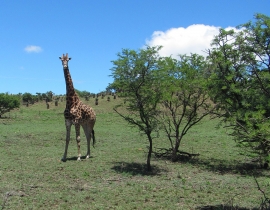 A big thank you to to 25th Colchester (St Matthew’s) Guides!