An update from the Elephant Orphanage project 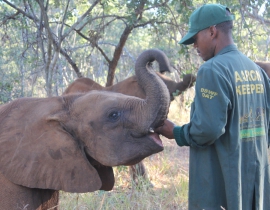 On the 23rd May 2018, two of the Lilayi Nursery orphans, Njanji and Kakaro, graduated from the Lilayi Elephant Nursery and began the 10 hour trip to the Kafue Release Facility to undertake the next stage of their rehabilitation. As the oldest orphans of the nursery herd, at 2 years 7 months (Njanji) and 2 years 4 months (Kakaro), they are starting to outgrow the nursery facility, both physically and socially. Moving the pair to the Kafue Release Facility will allow them to integrate into a bigger herd of 12 orphans, all of whom are older than them.

This is a significant stage in their rehabilitation as they move into a much more spacious and wild environment, where they will learn important behaviours from the older orphans, along with anti-predator skills which are vital for their successful release. Njanji and Kakaro will also be reunited with Muchichili and Nkala who were translocated from the nursery in November 2017.

After arriving safely at the release facility, Njanji and Kakaro met their 12 new companions through the fence on the 24th May and then joined the herd for a bush walk; the start of an extremely important stage in their rehabilitation, exposing them to sounds, smells and sights that they have not experienced before.

Of the 12 orphans at the release facility, ten are milk-weaned orphans who are feeding independently, but still require the security of the boma overnight, and two are release phase elephants who come and go, joining their surrogate siblings as and when they choose. Through January to March, the two release phase orphans, Chamilandu and Batoka, stayed overnight in the boma only five times, and on the other 85 occasions, spent the night out. This shows their gain in confidence and the will to live independent lives roaming in the wild. These older elephants are all monitored by satellite collar to understand their movements when they are out of sight and to correlate these with evidence of wild elephant presence. In the past year, the incidence of wild elephant and orphan herd interactions have significantly increased and the oldest female Chamilandu, at 12 years old, has been witnessed being mounted by a wild bull.

Three orphans, Mulisani, Kasewe and Mkaliva, remain at the Lilayi Elephant Nursery. This will be the perfect opportunity for Mulisani to establish his dominance as the oldest male, as he has struggled with his confidence since he was rescued.

Colchester Zoo’s Action for the Wild has supported the Elephant Orphanage Project since 2010. Since we first started support, we have donated £40,000 to assist with the rescue, rehabilitation and release of the elephants. In May 2018, we donated a further £7,500 to continue helping them with their efforts; £5,000 towards elephant care and £2,500 to support the wage of Aaron, who has been one of the elephant keepers since 2012. We are also working to raise a further £2,500 to support Aaron and if you would like to help, please donate here: https://www.actionforthewild.org/support-us/donate

Throughout 2018, bear rescues in Laos have continued. In... 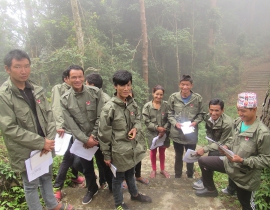