Colchester Zoo Action for the Wild has donated £53,650 to the Elephant Orphanage Project (EOP) since 2010. We will be making an additional contribution this year of £10,000 to this important project; helping to rescue, rehabilitate and release orphaned elephants back into the wild.

In the early 1970s, Zambia was home to over 250,000 elephants, today less than 20,000 remain. The need for the Elephant Orphanage Project is growing rapidly as poaching is still on the rise and there is an increasing loss of elephants due to conflicts occurring as human expansion and farming is increasingly prevalent nearer to parklands and often blocking elephant migration routes. With an estimated 40,000 elephants being killed each year, many of those slaughtered, young calves are left behind, with remote survival prospects without human intervention.

The Elephant Orphanage Project has developed and grown over the last 13 years and is now fully operational with established infrastructure both in Lusaka and Kafue National Park.

It has three main aims:

EOP currently has 23 elephants in its care, each with individual, detailed wellbeing assessments to ensure welfare and monitoring procedures are implemented to the highest standard.

In 2022, Colchester Zoo Action for the Wild funds will go towards elephant costs (elephant food and veterinary supplies) and towards a keeper’s salary. EOP have a fantastic team of keepers, and as well as the day-to-day care of the orphans, they are directly involved in the rescues of new orphaned calves, often spending many days away from home and their families to ensure the health and wellbeing of newly rescued calves, who are extremely vulnerable.

Current Status: 23 elephants within the programme

These orphans are require high level of care at the Elephant Nursery from point of rescue until weaning age (approx. 3 years).
Orphans over 3 years old are transferred to Kafue Release Facility to be weaned from milk and supplementary feeding; gradually reducing dependency on human support over the years until they are ready. The 17 strong herd is made up of 5 supplemented dependent juveniles; 9 milk-weaned dependent juveniles; 1 previously released sub-adult female and her wild born calf who are now dependent (for security); 1 independent sub-adult, joining the orphan herd for walks . This independent sub-adult, Tafika has remained a free-roaming elephant, not entering the Kafue Release Facility boma, and spending his nights away from the facility, although most days he still meets up with the herd. His longest excursion away has now been 16 days by himself demonstrating his increasing confidence.
1 elephant, 13 year old Batoka, fully released since Feb 2020

Watch the video below to find out more about how Colchester Zoo Action for the Wild is helping the EOP.

July has bought some exciting developments with Action for... 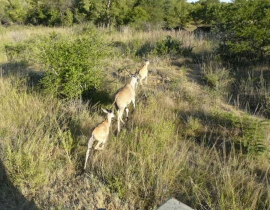