Colchester Zoo’s charity, Action for the Wild has supported the Orangutan Foundation since 2010. The most recent update from the project shares some fantastic news from the field with the arrival of a new born orangutan at the Lamandau Wildlife Reserve!

A female orangutan known as Acui gave birth to a male infant near to one of the release camps within the reserve. Though staff didn’t see the birth, it was clear when Acui came to camp that her young was very newly born. Both mother and infant are doing well and Amina, Acui’s daughter aged eight, also travels with them.

In other news, Rocky, once the pet of a taxi driver, has been making some appearances at the reserves camp despite preferring to spend most of his time in the surrounding forest since his release. Interestingly he comes to visit Okto who is a young male that is not yet ready to be released on to the main reserve. Okto is without a mother and Rocky seems to have taken him under his wing. It’s great to hear that Rocky has now become his teacher and that the pair are happily living in the wild within the safety of the reserve. 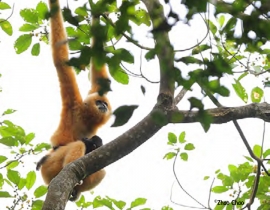