Since 2006, Colchester Zoo’s Action for the Wild has donated over £9,000 to support the Komodo Survival Programme in conjunction with the European Association of Zoos and Aquaria (EAZA) European Endangered Species Breeding Programme.

Throughout April to June 2017, the programme has concentrated on conducting training on ecotourism to locals in north Flores and on conducting Komodo dragon distribution surveys on west and south-west Flores.

The ecotourism training programme is designed to provide capacity building for local communities, so they can gain benefit from the presence of Komodo dragons in their area. The goal is to form a sustainable ecotourism programme in collaboration with the tourism department of the local government.

The Komodo dragon distribution survey has continued this year on Flores. The survey of the north coast of Flores was finished in 2015-2016 and, this year, the programme aims to finish surveying the west and south coasts.

After a preliminary survey in January, 28 camera traps were successfully placed in the field between April  – May 2017 to monitor parts of the west and south-west coasts, with the rest being monitored later in 2017. Komodo dragons were found on both coasts. Unfortunately most of their habitat on the west coast is not protected, and a lot of the habitat has been converted to agriculture or has been sold to investors for development. On the other hand, the south-west coast of Flores is still a pristine area, although human access is increasing.

The Komodo Survival Programme is now looking for the opportunity to get funding to purchase an area to form a reserve and to conduct community awareness programmes and train locals to protect the area. They also plan to raise the profile amongst local and central governments to warn them about the threats to remaining Komodo dragon habitat, and the fast development on west Flores. The goal is to save the last Komodo dragon habitat left on the west part of Flores outside of the Wae Wuul Nature Reserve. 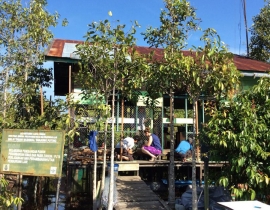 August 2014 update from the Orangutan Foundation

Action for the Wild has proudly been supporting the...