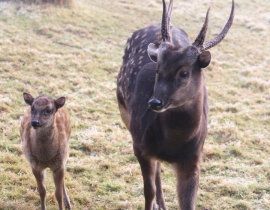 The ‘Biodiversity Conservation Centre (BCC)’ was formally opened in the grounds of the NFEFI in 1994. It was set up with the idea of developing a world class conservation breeding, research and education centre, based in the heart of the West Visayas Faunal Region.

Key highlights for the centre during 2012 include the first-ever captive breeding of the Visayan leopard cat, the birth of three Visayan warty pig piglets from a new breeding pair, the birth of a Visayan spotted deer fawn, the first successful hatching and fledging of two Visayan bleeding-heart pigeons from a new breeding pair, and the successful hatching and fledging of three Philippine eagle-owl owlets. Another important addition was the donation of an adult wild-born female deer to the Centre. The first pair of Philippine eagle-owl were also transferred to the Talarak Foundation Inc in Negro, to initiate the first local conservation breeding extension project for this species in this facility.

Regular tours within NFEFI-BCC were conducted as part of the information education campaign. Group tours were given initial orientation talks about the importance of biodiversity conservation, followed by guided tours of the Centre. A total of 11,826 visitors came to the Centre in 2012, the majority of whom were students and teachers from schools around the province, ranging from kindergarten to college levels.

Other activities locally included; The Wildlife Month celebration, which received additional support and increased participation in 2012 from different local government units, academic institutions and other organizations. Activities were also extended to many new cities. Photos of Negros’ threatened species were also displayed in many of the participating cities. The ‘Wildlife of Negros Foot Parade’ was the culminating event for the celebration. Participants from various academic institutions, government and non-government institutions marched on foot wearing masks/headdresses of threatened endemic wildlife from the West Visayas Faunal Region. 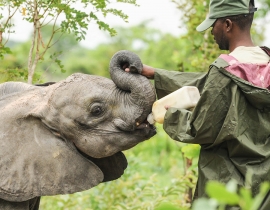 Young elephant calf Suni was found in the wild...

Action for the Wild has been supporting VulPro in...