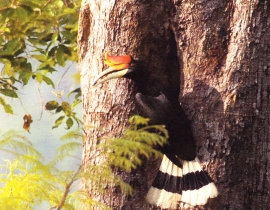 Colchester Zoo’s Action for the Wild has supported the Hornbill Research Foundation since 2002, adopting families of hornbills in southern Thailand. Our adoption helps fund researchers from Bangkok’s Mahidol University, along with 39 villagers, to look after hornbill nests found in natural tree cavities in a patch of tropical forest in Budo-Su-Ngai Padi National Park and to record hornbill biological data at all the nest sites as part of the team’s research to better understand the biology of the hornbills.

In 2016, 101 nests were available and 68 were monitored at Budo. Of these monitored nests, 26 were sealed up and 17 chicks fledged. Throughout this period, Colchester Zoo’s Action for the Wild adopted three nests; belonging to helmeted, rhinoceros and white crowned hornbills.

Our helmeted hornbill nest was first found in 2016, 35m above the ground. The nest was located on the 9th April but the female and chick were already sealed inside the nest. The female and chick emerged on the 26th July. In 2016, this is the only nest where helmeted hornbills successfully bred out of the 6 monitored nests. The nest guardian observed the nest over 72 days, monitoring for over 6 hours per day. The male hornbill bought at least 22 fruit species to the nest and three species of invertebrates; centipedes, walking stick insects and leaf insects; feeding food every 2 hours in a constant quantity. The nest guardian responsible for this nest, Mr Arase, has worked as a field assistant in the province since 1995. He is one of the core team members who repairs and modifies natural tree cavities and installs artificial nests. In 2016, he trained his adopted daughter and hopes that his family will become the new generation of guardians who will assist in saving hornbills and local natural resources.

Our rhinoceros hornbill nest was first found in 1999, 10.5m above the ground. The pair have used the nest for 14 consecutive years and have fledged 12 chicks. The nest cavity has been repaired twice by adding soil on the nest floor and adjusting the size of the entrance. In 2016, the female entered the nest on the 15th February and emerged on the 30th April, however, the chick was stolen on the 15th May. The police were informed and the chick was rescued on the 17th May, with the thief arrested. The chick was returned to the nest but the parents did not care for it, so it was taken to a Wildlife Rescue Centre.

Our white-crowned hornbill nest was first found in 2006, 5m above the ground. The pair have used the nest for four years and produced 3 chicks. Sadly in 2016, the pair did not breed successfully, and the female emerged after spending 45 days in the nest. Out of 5 maintained nest trees, there were no successful white-crowned hornbills fledging in the Budo Mountain in 2016.

In 2016, there were 46 guardians from 7 villages, including 13 local professional guardians, 11 young guardians to substitute older ones and 22 trainees. Each local guardian works 6 days per week to monitor 2-6 active nest cavities from January to September, collecting 4-6 hours of data per day. In addition to monitoring the nests, the team repair them to extend their suitability as nest sites and educate school children in villages surrounding the Budo mountain range on the conservation of hornbills, as well as hiring local villages as research assistants to prevent poaching of chicks.  The goal is to enhance knowledge, skills and awareness of hornbill research and conservation through lectures, exhibitions, workshops and nature walks. 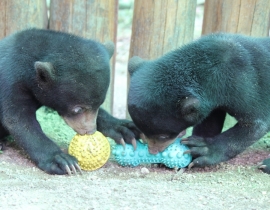 The 187th sun bear cub rescued since Free the...