Brown hyena collared thanks to Action for the Wild funds 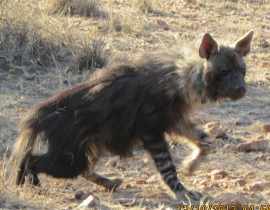 The second of four collars purchased with Action for the Wild’s donation has now been used by the N/a’an ku sê project in Namibia. It has been used to collar a male sub-adult brown hyena and is currently only one of two hyenas fitted with a GPS unit at this moment in time.

The landowner, who already benefits from a N/a’an ku sê GPS collar and is currently monitoring a big male leopard on his property, had hoped to capture another local leopard for monitoring purposes. Instead he caught a brown hyena. Staff were eager to fit the hyena with a GPS collar as currently no-one has any information on the ecology and conflict involvement of brown hyenas in Namibia’s commercial cattle farming areas. This individual is only the fourth inland brown hyena to ever be fitted with a GPS collar, and therefore becomes somewhat of a pioneer for other conspecifics in central Namibia. Information gathered will also be compared with brown hyena living in coastal areas.

The brown hyena, now labelled as N075, weighed in at 33kg and was in excellent physical and nutritional condition. After measuring its neck at a circumference of 52cm, staff estimated the male to be around 2 years of age. Its teeth also confirmed the assessment, as many were still erupting and were mainly white.

In agreement with the farmer and Dr Wiesel, a world expert in brown hyenas, the collar will be set to 24 locations per day. Although this may reduce the collar’s battery life significantly, it will be very important to locate the hyena’s resident den sites, enabling researchers to potentially study an entire hyena clan. In addition, farmers often claim that brown hyenas kill livestock, but there is no proof. This species is generally known to be scavenger; however there is no evidence to prove this, or confirm that it is involved in livestock depletion. Collaring this hyena will also give a unique opportunity to assess its movements against the already collared leopard in the area. Because of this special scenario, the farmer has already asked all neighbouring cattle producers to refrain from trapping or killing the hyena. 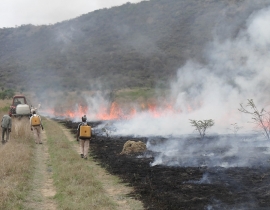 Firebreaks undertaken at the UmPhafa Reserve

As summer at UmPhafa Reserve comes to an end...