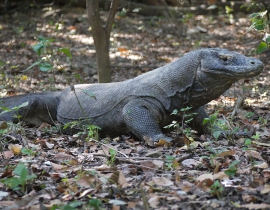 The Komodo dragon Varanus komodoensis is endemic to five islands in south-eastern Indonesia; however, one of these islands; Flores, does not make up part of the Komodo National Park. Since the 1970’s, population densities of Komodo dragons on the island have decreased, mainly as a result of expansion of human settlements, forest clearance and slash-and-burn agriculture. On Flores, Komodos are now mainly found in the nature reserves of Wae Wuul and Wolo Tado, located on the western and northern coast of the island. Since 2005, Action for the Wild has been supporting the Wae Wuul Reserve Rehabilitation Project and their work to protect this remnant Komodo population.

The main threats to the reserve and Komodo dragons are deer poaching, arson and sporadic illegal logging. In response to these threats, protection plans, such as the one at Wae Wuul, have been developed to help protect the remaining Komodo dragon populations by raising community awareness of the plight of this species, involving the local community and setting up security patrols and legislation to help offer more protection from poaching and destruction of habitat.

The training of staff in wildlife monitoring techniques is an essential part of the project. Staff of the Indonesian Central Bureau for Conservation of Nature Resources (Balai Besar Konservasi Sumber Daya Alam – BBKSDA) are trained in wildlife monitoring techniques and ecological data analysis. This data helps to produce estimates of Komodo dragon and ungulate population size and density. To collect data on Komodo dragons, staff are trained on how to use baited aluminium cages for trapping them, marking them with microchips and on the collection of blood samples. Collection of this data will give a deeper understanding into the current population size, survival rates and age structure of Komodo dragons on the reserve. A total of 26 trap locations were positioned in the Wae Wuul reserve and, during 2011, a total of 14 Komodo dragons were trapped. Two of these dragons were animals already captured in 2010.

As well as directly looking at Komodo dragons, the project also carries out regular assessments on the population density of their main prey species; the Timor deer, the water buffalo and the wild pig. Direct counts of deer, pigs and buffalo from vantage points are not feasible in several areas of the reserve due to the presence of forest and woodland habitats. So, instead, the project uses faecal pellets counts to estimate the relative or absolute abundance of the prey species. In 2011, the survey resulted in a relatively high number of Timor deer pellets, a very slight increase in wild pig pellets and an increase in water buffalo pellets. These numbers, specifically showing that deer numbers are increasing in the reserve, represent stability of the Komodos’ natural prey species and therefore will be a significant contribution to the sustenance of the current dragon population.

The Wae Wuul project is also involved with community awareness, and has set up a programme that visits villages located close to the boundary of the reserve. The programme aims at promoting the importance of sustainable use of natural habitats and the commitment of national and international sponsors in the sustainable development of Wae Wuul. Overall, the community awareness sessions held in 2011 emphasized the importance of the involvement of the local community, and the maintenance of such initiatives in a long-term programme for effective sustainability of the Wae Wuul reserve.

Patrolling activities represent another important component of the Komodo dragon conservation programme in the Wae Wuul nature reserve. The patrolling programme is conducted by members of BBKSD and selected members of the local community. Patrolling is conducted across the reserve to monitor and control arson in the savannah and grassland, control the occurrence of feral dogs, wood harvesting and halt illegal hunting of deer. Patrolling was conducted in Wae Wuul every other day from June to August. In 2011, a few instances were reported where local people felled forest trees in an attempt to make a cultivated field near the eastern boundary of the reserve. Fires were also spotted in the central part of the Wae Wuul grassland habitat, but were later extinguished. The project during its patrolling activities also tested a new monitoring technique, using cameras and bait to attract wildlife. The hope is this could be used as an alternative to live caging for Komodo dragon population density estimates.

Action for the Wild donates annually to the Wae Wuul project and just last month (January) our annual donation of €1,000 was sent across. £200 of this donation was kindly raised by the Mid Anglia Herpetological and Invertebrate Club (MAHIC). Action for the wild would like to again send their thanks to MAHIC for their donation.

If you would like to donate towards the Wae Wuul project please visit our donation page.

Wild tigers and leopards could be facing yet another...