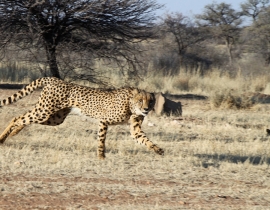 N/a’an ku sê are continuing their work in the field of human / carnivore conflict mitigation. On the 7th April, they received a call about a leopard caught in a gin trap. Arriving at the scene, it was heartbreaking to find a leopard cub, no more than a month old, caught in the awful contraption. Thankfully his paw was not broken but, being swollen and tender, with a chance of infection setting in at a later stage, he was taken to the sanctuary to recuperate.

Human / Carnivore Conflict Mitigation is a primary research focus of N/a’an ku sê. GPS collars are vital in determining the movements of the carnivores to ensure they don’t come into conflict with humans. A second cheetah was collared at Kanaan reserve in April. Events like this are vital for the N/a’an ku sê team, as more collared carnivores allow them to extend research and knowledge of each species, enabling them to further conserve these animals.

On the 21st May, N/a’an ku sê also responded to a call from a nearby farmer who had caught a leopard in a trap cage. This 65kg magnificent male was one of the largest leopards forming part of the release programme. The farmer chose to have the leopard removed from his land, and, after fitting the big cat with a GPS collar, the rapid response team headed back to N/a’an ku sê with the leopard, which was released onto the N/a’an ku sê reserve that afternoon. This big cat’s movements, behavioural patterns and threat to livestock will now be accurately and scientifically monitored, adding to the vital work carried out by the research team.

May 2014 Update from the Red Panda Network