The Orangutan Foundation’s aim is to conserve the now critically endangered Bornean orangutan and its threatened habitat.

They currently fund and operate five orangutan release camps in the Lamandau Wildlife Reserve, Central Kalimantan, Indonesian Borneo. This reserve spans a 64,000ha area and is one of the few sites in Indonesia that conducts soft-releases and receives orangutans translocated from threatened areas. Thanks to the rescues and translocations, Lamandau now has a healthy and viable orangutan population, which are regularly health-checked, monitored and protected.

The Orangutan Foundation aims to rescue wild orangutans at risk from injury and death and move them to the safety of the reserve. Action for the Wild’s funds provide ongoing support for this veterinary rescue and translocation programme. This funding is crucial to cover the vet’s annual salary, as well as accommodating the increasing number of orangutan rescues and translocations. The majority of rescues come from an area of Central Kalimantan that is seeing orangutan habitat loss at an alarming rate.

2016 started with three orangutans being released into Lamandau on New Year’s Day; the female and her infants were rescued from a rubber plantation. Thanks to Action for the Wild’s support over the year, the Foundation has been able to rescue 25 orangutans and conducted 29 rescues of other wildlife species. This high number of rescues is thought to be a result of rapid urban expansion. One particularly poignant rescue was Narti, who was found completely stranded, clinging to the burnt remnants of a tree surrounded by oil palms.

Some of the Foundation’s other developments for 2016 include the planting of 16,000 Ubar tree seedlings; nurtured and planted to restore areas of the Lamandau Wildlife Reserve damaged by forest fires in 2015. In July, the construction of a new guard post began. Now up and running, this guard post is critical for the protection of the new 8,000 hectare extension of the Lamandau Wildlife Reserve, and in October, an ophthalmic surgeon visited female orangutan Aan. Aan was rescued back in 2012, having been shot 104 times by a local villager with an air gun; 32 pellets were removed on rescue but unfortunately those lodged around her eyes had left her blind. The ophthalmic surgeon visited in October to assess the permanence of her blindness and she will return in February 2017, to try and restore sight to one of Aan’s eyes. 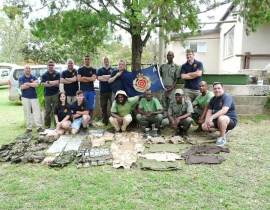 Anti-poaching team given a boost with army kit donation!

UmPhafa would like to say a HUGE thank you...