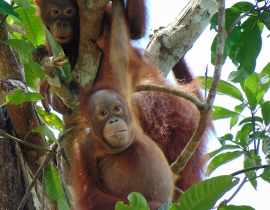 The Orangutan Foundation is working to save orangutans by protecting their tropical forest habitat, working with local communities and promoting research and education.

In 2017, Action for the Wild donated £6,000 for a veterinarian’s salary and associated costs necessary to perform a number of orangutan rescues and veterinary procedures.

The Lamandau Wildlife Reserve operates an orangutan soft release programme and receives orangutans translocated from threatened areas, such as community land and fragmented sections of forest.

The Orangutan Foundation’s main priority is habitat protection and they operate 8 guard posts within the reserve, and run a forest restoration programme to reinstate currently degraded areas of the reserve affected by forest fires. In 2017, 22,000 tree saplings were planted out in the Lamandau Wildlife Reserve.

The Orangutan Foundation is supporting over 300 reintroduced orangutans with regular health check-ups, monitoring and protection. They employ 30 full time staff to work within 5 release camps and currently have 10 orangutans in the soft release programme.

In 2017, 14 orangutans and 28 other animal species were rescued and handed over to the Foundation and translocated onto the reserve. The rise in animals handed over after being kept illegally as pets is thought to be a result of habitat loss, forcing humans and animals to live in close proximity to each other.  It is hoped that the number of orangutans in such situations will decrease with workshops to raise awareness of the laws protecting these threatened species, and support of the new Head of Wildlife for Central Kalimantan.

The number of rescues of stranded orangutans this year has been lower than previous years, however, habitat loss is still ongoing and stranded orangutans continue to need help, with a December rescue involving a female orangutan stranded in a patch of forest within a tourist beach resort.  This is the first time an orangutan has been rescued from a nearby beach, but luckily, for this orangutan, she was taken by boat to the protected Lamandau Wildlife Reserve. As soon as the cage door was opened she clambered straight up the nearest tree and disappeared into the forest canopy.

Orphaned Elephants Zambezi and Musolole have taken their first... 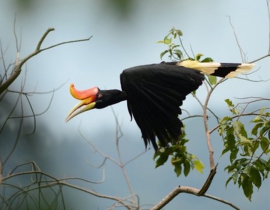