Update from Action for the Wild’s Supported Elephant Orphanage Project 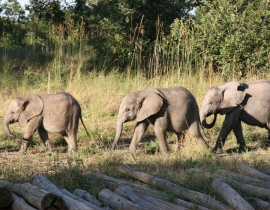 In May, Action for the Wild will be donating £5,000 to the Elephant Orphanage Project. We have supported this project since 2010 previously donating £20,000.

It is currently the wet season in Kafue National Park and the seven juvenile elephants at the release facility are thriving with the lush foliage and grass. As there is so much food to eat, it is the perfect time to wean the orphans; such as three and a half year old Mosi-oa-Tunya who has recently had his last milk feed. Naturally elephants wean at between two and four years of age, so the EOP mimic this process by eliminating one of the eight daily milk bottles at a time.

Another orphaned elephant, Chodoba, was fitted with a GPS tracking collar last month as he ventures further into the national park as part of his release process. Generally he follows the orphans in the daytime, but during the night, he ventures in the grasslands and forests to feed. The team’s researchers are able to use his GPS positioning to follow his path and note what foods he is eating.  This data is important in understanding Chodoba’s independence and integration into wild elephant society.

Relocated and rehabilitated orangutans are enjoying good health in... 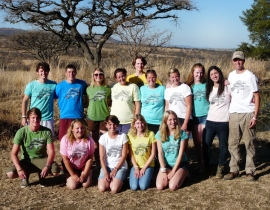