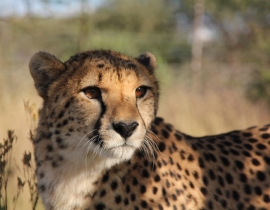 Action for the Wild has supported the N/a’anku sê Carnivore Conservation Research Project since 2012. Our donated funds in 2012 and 2013 have been used to purchase 7 radio collars to monitor the movements of carnivores. Our collars have been used mainly on cheetah and leopard, but also on one brown hyena.

Unfortunately carnivores are often persecuted by local farmers as they believe they are a threat to livestock. All of our collared carnivores are now monitored, so the local farmers can be informed of their whereabouts and others have been moved to safer habitat away from such conflict with humans.

Our young male collared leopard, N063, was initially captured back in 2012 on suspicion of attaching cattle calves. In the whole monitoring period, this male leopard has only predated once on livestock, and thankfully the landowner is happy to receive regular movement data on the leopard, so that he can ensure his livestock are safe and the leopard doesn’t get too close. This male will be recaptured soon to fit a new collar.

Our male collared cheetahs are also avoiding human inhabited areas. N074 has been shown to avoid livestock areas, although N076 does appear to travel through livestock and wildlife ranches, as well as tourism and hunting properties. The daily movements of these male cheetahs are shared with five landowners to increase their tolerance towards them, and so far, no conflict has been reported involving either of the males. Their behaviour is also documented. The males tend to avoid each other even when their territories overlap and both mainly select red hartebeest, the most common antelope in central Namibia, to feed upon. Researchers are now tracking both males intensively on the ground to record image data of their left-hind footprints found along roads, riverbeds and wildlife trails. Images of the footprints are going to be used to develop Cheetah Identification software

Our collared female cheetah, N058, was relocated far away from where she was initially captured. Her cubs survived the move and all have their own regular ranges on the release reserve. The female since produced another litter of 5 cubs in 2013. Throughout this time, there has not been any conflict with livestock. The GPS element of the female’s collar has now expired, but a radio beacon from her collar still enables researchers to find her sporadically. This case shows that cheetahs can successfully be relocated to new environments without returning to their original capture site.

In contrast, male cheetahs N065 and 066 did return to their original habitat following only a short distance relocation. This case study demonstrates that cheetahs should not be relocated to a new location less than 150km away from the conflict situation, or into areas where they are familiar with landscape features allowing them to home back to their original conflict site. In fact these two cheetahs have incredibly large ranges of over 430km2 and they regularly move between 20km and 30km on a daily basis. During the monitoring period, the males were not reported to cause conflict on cattle or wildlife ranches though, so haven’t proved problematic.

Action for the Wild has pledged its support to N/a’anku sê in 2014, by providing £4,625. Our funds have been used to purchase research equipment for the new N/a’an ku sê field research site in the Omaanda-Ombidi Wildlife Reserve in central Namibia 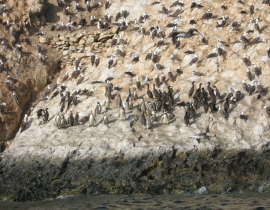 Action for the Wild has been supporting the Punta...